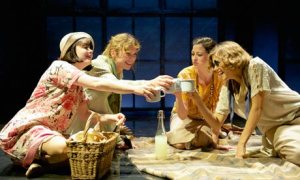 You wouldn’t necessarily know it walking out of Finsbury Park tube (where are the posters?) but a hundred metres away is London’s newest theatre, consisting of a medium-sized space, a tiny studio and a rather nice bar. In its first couple of weeks I’ve seen two plays there.

These Shining Lives, directed by Loveday Ingram, was adapted from a version premiered in Baltimore in 2008 and is based on the true story of four workers at Chicago watch factory US Radium Corporation, who painted the luminous dials on clocks and watches with a mixture of glue, water and radium, earning eight cents per piece. To keep their brushes sharp, the women were encouraged to lick them into shape. Many became sick and died.

The play eschews the operatic; rather than focusing on a Hollywood-style narrative where the women take on the factory owners and brave tabloid vilification to the sound of fortissimo strings, it is the story of Catherine Donohue (Charity Wakefield), framed through her relationships with her three workmates Charlotte (Honeysuckle Weeks, excellent), Pearl (Nathalie Carrington) and Frances (Melanie Bond) and her husband Tom (Alec Newman). As the women start failing physically, they are lied to by the company doctor who tells them to take aspirin and by their foreman (both played by David Calvitto), who tells them the company has their best interests at heart, but who sacks all four.

In the 1920s and 30s, women working was both novel and problematic; I’m informed by our resident A Level History student that 26 US states banned married women from working during the Depression. The sense of freedom that those eight cents a watch could buy underlined by the women’s trip to the beach one summer’s day, where they kick off their shoes and Charlotte uncorks her hooch.

As the story continues through the Depression, keeping their jobs and therefore not rocking the boat becomes imperative. Finding one doctor who finally tells them the truth about their ailments, the women’s submissiveness, learned through class and gender norms, still inhibits them from making a fuss; the decision to take on their former employers boils down to a poker game. I wasn’t completely convinced of the central couple’s chemistry or the shoehorned metaphor of time (time, clock faces… see what they did there?) that underpinned Catherine’s final monologue, but there is strong ensemble playing and the story is affectingly told. You will leave appalled that this could have happened in living memory.

The Thing About Psychopaths, by Ben Tagoe and directed by Rod Dixon for the Red Ladder Theatre Company, is not, as the title might suggest, a gore-fest but the story of Noel (a strong debut by Shawn Cowlishaw) and his bad angels. Noel begins as a naive IT worker in a City bank who, despite his moral qualms, gets embroiled in a fraud after being persuaded by trader Ray (Babajide Fado) and is found out. Taking the rap, he is sent to jail. Once inside a claustrophobic cell, he comes under the sway of Michael, whose back story is played with enormous verve and nuance by William Fox. Michael’s plot to attack the warder O’Boyle (Kyla Goodey) is foiled and Noel gets the upper hand. The trajectory from queasy novice to powerful bad boy is complete.

So a strong start for the Park Theatre’s first season. By the way, both productions were without interval. I like the tight focus and it’s great to have time to go for a meal afterwards, but I do wonder whether they’re missing a trick in bumping up the bar takings..

Tagged as Chicago, Park Theatre, The Thing About Psychopaths, These Shining Lives

Fictions of politics and the executioner’s axe 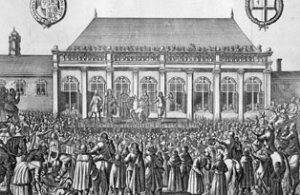 What happens when politics morphs into fiction? I’m not talking about spin doctors and myth-making, but the problems inherent in dramatising recent history. The modern mind tends to place history and fiction as generically distinct forms whose readers have differing expectations, but for the early moderns that distinction was blurred.

Take roman à clef, which had a brief but intense flowering during the Interregnum. The immense romans à clef Panthalia, Theophania and The Princess Cloria all retell Stuart history at huge length. Real characters appear under different names and with neatened-up narratives. The few critics who attend to these texts largely see them as ideological; at best, they’re viewed as compensatory fictions for defeated royalism where disguise is a defensive move to fend off censorship.

However, the rush to work out which character represents which political figure is to ignore that hugely enjoyable space between history and fiction where the drama is not about ship money or the Scottish Kirk or diplomacy with Spain but is told entirely through character. For example, The Princess Cloria was reprinted in 1661 with the disguised names still intact. After the Restoration, there might seem to be no need for a royalist writer to use code, but the preface gives us a clue. The exigencies of fiction and readerly pleasure, rather than history, are highlighted: “Do not look for an exact History, in every particular circumstance; though perchance upon due consideration you will finde, a certain methodical coherency between the main Story, and the numerous Transactions that passed, at home and abroad, as may render people competently satisfied; for that the tediousness of reparties, and impertinent discourses, commonly used in inventions of this kinde, are for the most pat omitted, that oftentimes not onely weary Readers with expectation, but make them cast away Books before they are half read.”

When you fictionalise recent history the draw is personality; plot becomes secondary to motivation. Think of going to see a David Hare play, which often explores the weaknesses of the rich and powerful behind closed doors. Or, indeed, This House at the National Theatre, which I saw the other week.

In This House the history of the Wilson-Callaghan governments is staged as clash of personalities; MPs’ individual decisions to rebel against the Labour whip create the plot. It’s history where teleology is king, since This House‘s underlying assumption that Thatcher’s lengthy apotheosis was inevitable.

The chaotic politics of the pre-Thatcher era will continue to be disputed, but for royalist writers in the Interregnum who are evoking pre-Civil War times there is one event that is un-rewritable: the regicide. Sir Philip Sidney pulled off the fake execution of Pamela in Arcadia, but no amount of narrative trickery can get you past the fact that in 1650s roman à clef the king is dead and his son is in exile. The dispossessed prince is a fundamental trope of romance, but in the early 1650s there were no happy endings in sight for the royalists; Restoration was barely envisaged.  (It’s why I always feel uneasy about using the term Interregnum, since it presupposes a historical inevitability that simply didn’t exist at the time.) To write a roman à clef in the 1650s you have to engage with the scaffold.

You don’t need to have read any Foucault to realise that an execution, with its blend of state violence and personal repentance, is pure theatre. A good scaffold speech, whether by criminals or aristocratic rebels, always set the early modern pulse racing. Take the execution of Thomas Wentworth, Earl of Strafford, in 1641. It spawned a large number of pamphlets very much aimed at the mass market; the bookseller, Francis Coules, had previously made his living selling broadside ballads (see here for an excellent blogpost by Mercurius Politicus on Coules and his colleagues). So forget any jurisprudential treatment of the subject; in restaging execution roman à clef is participating in the collective and demotic world of pamphlets as much as the discussions of statecraft in Sidney’s Arcadia or John Barclay’s Argenis.

In allowing the characters to reframe their own autobiography and speak of their motives the scaffold speech is both a neat microcosm of the historical and fictional process and a confessional shriving. Richard Brathwaite’s Panthalia (1659) obsessively replays execution as the cornerstone of Tudor-Stuart history, starting with Clarentio (the Earl of Essex) and narrating the deaths of Mariana (Mary Queen of Scots) and Sophronio (Thomas Wentworth, Earl of Strafford). It also devotes considerable space to Silures (Buckingham) as Jacobean villain, whose death is unjudicial, but is perhaps providential. Royal power in this romance is decisively centred upon the executioner’s block, and the transfer of that power to the Senate (Parliament) with the death of Rosicles (Charles) is clearly signalled when he points to the axe, saying: “There is an instrument… that will shortly ease me of my sufferings.”

The king becomes a marginalized and solitary figure. Brathwaite’s rendition of his speech includes his grief for the execution of Sophronio/Strafford, as indeed Charles’s speech did.  While Rosicles/Charles initially speaks of himself as a prince who has “become a Sacrifice to his Subjects”, the religious element is relegated in favour of a dynastic lament: “Never did Royal Race.. fall into like misery”.

In contrast, Charles’s speech on the scaffold that cold January day in 1649 was considerably more religious in tone, taking place an hour after he had received communion. Ten days after his death Eikon Basilike, The Pourtrature of His Sacred Majestie in His Solitudes and Sufferings was published. Eikon Basilike, that brilliant mixture of the sacred and self-justifying, went through 36 editions in the first year of its publication, and not even Milton’s counterblast Eikonoklastes could stop Charles’ transformation into martyr.

Remarkably, Panthalia does not engage in the project of Anglican canonisation undertaken by Eikon Basilike; despite his subtitling of his work “The Royal Romance” Brathwaite never marshalls the devotional strategies to be found in royalist elegy of the period. Brathwaite’s ambivalence towards the romance’s subscription to royalist history is striking. This is a disappointed text, not a propagandistic one.

Tagged as Charles I, Margaret Thatcher, National Theatre, regicide, roman a clef, romance, the Earl of Strafford, This House